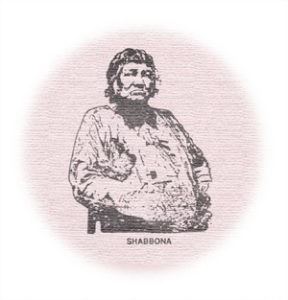 In 1804, the United States made a treaty with most of the Sac and Fox Indians. According to the treaty, the Indians were to move westward across the Mississippi River.

Black Hawk, the chief of the Sac and Fox refused to accept the treaty. After the War of 1812, when he and his 500 warriors fought along-side the British, he was forced to sign the treaty. Black Hawk, however, did not consider himself bound by the treaty and until 1830 he often attacked white settlers in Illinois.

Then, in 1830, the United States made several promises to persuade Black Hawk to sign a new treaty and he finally moved west. The promises of a growing nation moving westward were not kept. A year later Black Hawk recrossed the Mississippi and the Black Hawk War was begun.

It was a brief war that saw massacres on both sides. It was a war that saw two future United States Presidents fighting the Indians. One was a long, lanky 23-year-old named, Lincoln. The other was Zachary Taylor, "Old Rough and Ready". Young Abe, by the way, was mustered out of the Illinois Militia at Fort Wilbourne just west of Oglesby, Illinois. Today, the Illinois Valley Community College is located on the Bluff where the Fort stood.

As Black Hawk proved to be a fierce enemy of the Americans, a member of the Pottowattami Tribe, Shabbona, proved to be a friend of the settlers. He rode his pony to near exhaustion warning the people of Northern Illinois of the impending danger of the Black Hawk raids.

In the War of 1812, Shabbona, too was on the side of the British. He fought his last battle against the "White Man" at Thames River near Detroit, Michigan. Unlike Black Hawk, Shabbona accepted the treaty and sought peace as a way of life.

On May 16th, 1832, Shabbona warned the people of LaSalle County of the Indian raids. Those who heeded the warning took refuge at Fort Johnston south of Ottawa or at Fort Wilbourne. The settlers of the Little Indian Creek Village fled to the safety of Fort Johnston. The William Davis family was among them.

Davis in particular had infuriated the Indians by building a dam approximately a half mile west of the settlement at Indian Creek. The Indians felt that the dam would disturb their fish supplies. In April of 1832, Davis caught an Indian tearing a hole in the dam and proceeded to beat him up. This, as far as the Indians were concerned, added insult to injury. The incident guaranteed the forthcoming disaster at the little Indian Creek settlement.

Shabbona's first warning turned out to be a false alarm and the settlers returned to Indian Creek. On the 20th of May Shabbona again warned the settlers that there was immediate danger from the Indians. William Hall and the rest of the whites started for the Fort. They met William Davis, who had just come from Ottawa, and he persuaded them to return to their homes. They arrived back at the settlement at about noon.

After lunch the village turned to a workday routine. It was planting time and a half dozen men were working the cornfields about 100 rods south of the lagoon. This, for them, proved to be a life-saver. The others busied themselves with chores and some conversation.

At 4 o'clock on the afternoon of the 20th, William Hall, J. Hall; Robert Norris and Henry George were in the Davis blacksmith shop where William Davis was repairing his gun. The rest of the village guns and ammunition were in another dwelling where, on that afternoon, William Pettigrew, with the Pettigrew baby in his arms, stood chatting with a gathering of ladies. Present at that impromptu sewing circle were: Rachel and Sylvia Hall; Mrs. William Hall and her daughter Elizabeth; Mrs. Pettigrew and her two children; and Mrs. William Davis along with her five children.

Conversation turned into alarm and then to horror as 60 to 70 Indians crashed the garden fence, filled the yard and headed for the house. William Pettigrew lunged forward to close the door and became the first to die at Indian Creek by an Indian bullet. All the women and children in the cabin were killed except Rachel and Sylvia Hall who were taken alive.

Upon hearing the terrorizing screams and gunshots, some of the weaponless men from the blacksmith shop rushed toward the house and were gunned down. John Hall jumped down the high bank of the creek and on hands and knees, crept to safety. A son of William Davis also escaped in much the same way. The men in the cornfield fled to Ottawa.

Those who died in the massacre: William and Mary Hall, their 8 year old daughter, Elizabeth; William Pettigrew, his wife and two children; William Davis, his wife and five children; Henry George and Robert Norris.

Sylvia and Rachel Hall, ages 19 and 17, were taken prisoners by the Indians. After nine days of near tortuous travel they arrived at a Winnebaggoe Indian village in southern Wisconsin. Chief White Crow had the girls taken to Blue Monda Fort on the Mississippi. He received a $2,000 reward.

Less than a year later, Rachel married William Munson. They settled on a land claim entered by her late father about a mile and a half from the scene of the massacre.

Sylvia married a minister and they settled in Cass County and then moved to Nebraska.

The White Man's friend, Shabbona, died in July of 1859 and is buried in Evergreen Cemetary at Morris, Illinois. One of his last public appearances was at the famed Lincoln-Douglas Debate held in Ottawa on August 21, 1858.

Prepared for the Memorial Committee of the Lasalle County Board of Supervisors, June 1964
G.R. Marshall, Superintendent of Shabbona Park;